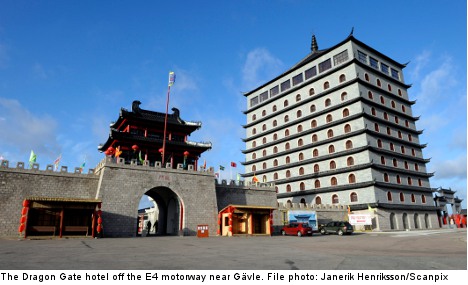 If you’ve ever driven along the E4 motorway near Gävle in eastern Sweden, you may have noticed an unusually oriental-looking building looming over the roadside. Tall, grey, and surrounded by construction work, the Dragon Gate hotel is as baffling a tourist attraction as they come.

IN PICTURES: See more of the Dragon Gate

Chinese billionaire Jingchun Li, who made his fortune in mosquito repellent, bought the Hotell Älvkarlen in 2004 and commissioned a rebuild, promising it would be the hotspot “where east meets west”. To this date, only the restaurant, museum, and souvenir store have been opened to customers.

“The hotel is not ready yet, it will open next year in the spring,” Kenny Li, who works in the Dragon Gate restaurant, told The Local.

“It’s an old hotel that’s being rebuilt, and these things take a long time. The water system needs to be reinstalled, for example. It takes longer to rebuild an old hotel than to build a hotel from scratch.”

The project has been hampered by other problems too.

In 2004, it was stung by the Swedish Work Environment Authority (Arbetsmiljöverket) and ordered to pay 1.1 million kronor ($167,000) for its bad conditions for staff. In 2008, it was voted “the worst building of the year” by the Byggnads Arbetaren newspaper.

The owner of the hotel, 66-year-old “Mister Li”, has been previously registered as living in Solna, north of Stockholm, has now left the country according to the Arbetarbladet newspaper.

Staff at the hotel confirm, however, that the billionaire “is loaded with money” and is not concerned with the figures.

So what can a visitor enjoy now? There are 200 replica terracotta soldiers in the museum, an enormous Guanyin statue, and a bouncy castle that costs 20 kronor a pop. The restaurant serves Chinese food and the souvenir shop sells Chinese trinkets, including miniature terracotta men.

While it remains unknown exactly when the Dragon Gate hotel will open its doors, one thing is clear: the team has loftier aspirations than just a drizzle of bemused tourists.

The official website promises a conference centre opening in spring, and a launch of the hotel with 56 individually designed rooms. A link to “Pictures of the Rooms” promises images to be uploaded in the spring.

In the meantime, the museum, restaurant, and shop remain open to a public which has so far been reluctant to enter the Dragon Gate.