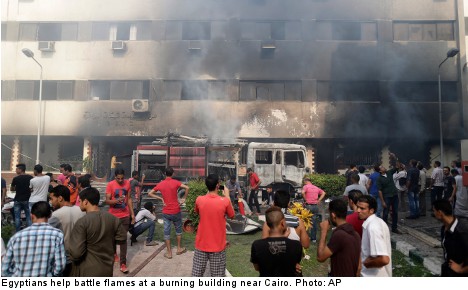 “We’re temporarily shutting our plants in and around Cairo. The decision was taken yesterday (Wednesday) and today (Thursday). We’ll meet this weekend to discuss it,” company spokesman Daniel Frykholm told AFP.

“We feel we have to evaluate the security situation,” he added.

Electrolux employs around 6,700 people in Egypt.

Meanwhile, Swedish-Swiss engineering firm ABB, which has more than 1,000 staff members in Egypt, claimed the recent violence in Egypt “hadn’t had any major effects on operations”.

“We’ve made some small adjustments in terms of work shifts in order to guarantee the safety of our workers. Certain travel restrictions have also been implemented,” ABB spokeswoman told the TT news agency.

Telecoms giant Ericsson has also taken measures to ensure the safety of staff working in Egypt, recommending its 700 employees to work from home.

Swedish furniture retailer Ikea also said plans to open its first store in Egypt may be in jeopardy.

The local franchiser has ordered a halt to operations on the site, which is located just outside of Cairo and is in the final phases of completion ahead of a scheduled October opening.

“Many of Ikea’s employees must travel through the city. We must think of their safety first and foremost,” Inter Ikea spokeswoman Ulrika Englesson Sandman told TT.

She added it “not unlikely” that the recent unrest in Cairo will delay the store’s opening.

“But it depends on how the situation develops,” she said.

At least 525 people were killed across the country on Wednesday when Egyptian security forces broke up protests in support of ousted Islamist president Mohamed Morsi, according to the latest toll provided by a health ministry official on Thursday.