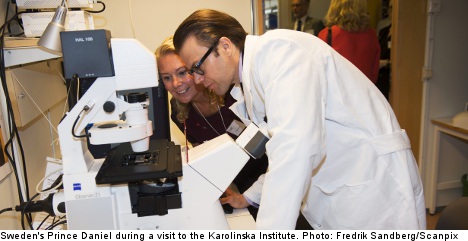 The Academic Ranking of World Universities (ARWU) was released on Thursday by the Center for World-Class Universities at Shanghai Jiao Tong University, and saw pleasing results for Sweden.

Stockholm’s Karolinska Institute fared the best in Sweden, placing 44th in the world. Uppsala University came in 73rd, with Stockholm University close behind at 82.

The news came as no surprise for Anders Hamsten, president of the Karolinska’s Medical Institute.

“The ranking was expected because it has been stable over the past ten years, but needless to say we are pleased,” he told The Local.

“What’s unique about us though is that we’re a one-faculty medical university competing favourably with traditional universities that have five or six faculties.”

He added that the Karolinska Institute is a research intense university, investing 85 percent of turnover into further research. This contributed to what he referred to as a “particularly pleasing” result in the Clinical Medicine and Pharmacy department, where the university finished 11th worldwide and first in Europe.

“Our objective is to further reinforce research performance, but we are very pleased with the outcome there,” he said.

The ranking is based on a number of criteria, including a look at the alumni and their success in the Nobel Prizes, the quality of staff, highly cited researchers, papers published, and academic performance per capita.

Also in the ARWU list were Lund University, which ranked in the 101-150 category, and the University of Gothenburg, which rated in the 151-200 category.

Six more Swedish universities made the cut inside the top 500. For the tenth year in a row, Harvard University in the US topped the list overall.

The Copenhagen University overtook Karolinska in 2013, making it the highest of all Scandinavian universities at 42nd. The leapfrog, however, is no skin off University President Anders Hamsted’s back.

“The University of Copenhagen is a traditional one with several faculties, unlike ours which has one. Of course, as we are all competitors, the ultimate goal is to rank as number one, but we don’t take the rivalry with our Scandinavian sister schools that seriously,” he told The Local.