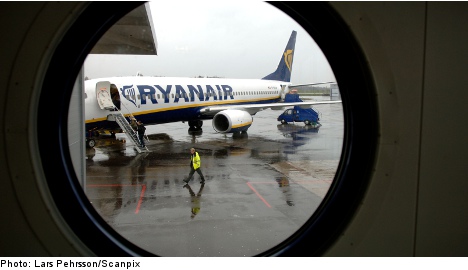 “On this occasion it (the investigation) went fine without the recordings but on another occasion perhaps it would not. It is unfortunate if data disappears,” Stefan Christiansson at the Swedish Accident Investigation Authority (Statens Haverikommission) told the local Södermanlands Nyheter daily.

The report indicates that someone within the company made ​​sure that the information never reached the responsible investigators.

The plane, a Boeing 737 en route to Paris with 179 people on board, suffered electrical failure in late April 2011. It therefore had to return to the airport outside Nyköping and make an emergency landing.

The Accident Investigation Authority classified the landing as a serious incident.

Analysis shows that both the voice recording from the cockpit and the flight data had been erased and the investigation was instead based on interviews with the pilots.

Ryanair responded however that it sees not untoward regarding the incident.

“The audio recording was restarted by a technician who sought to remedy the electrical failure following a decision by our technical department. They did not consider it necessary to preserve the recording,” the airline’s communications manager Robin Kiely told the newspaper.