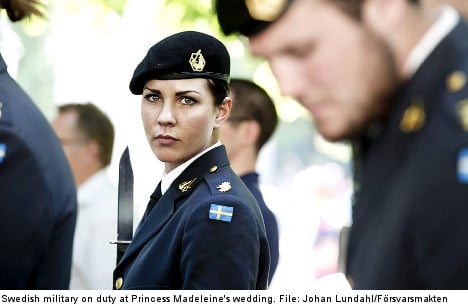 In 2011, the year Sweden moved from mandatory conscription to an all-volunteer force, 14 percent of recruits for basic military training (grundläggande militära utbildningen – GMU) were women, the Arbetarbladet newspaper reported.

The move to 20 percent represents a significant shift from the era when military service was mandatory for men and the number of women who volunteered was only five percent.

IN PICTURES: Swedish women in the armed forces – from Afghanistan to submarines

Mathilda Spaton-Goppers, a 20-year-old Stockholm native at the start of basic training in Gävle in eastern Sweden, cited curiosity and a thirst for experience as motivating factors behind her decision to sign up for the military.

“I want to find out for myself and develop my own understanding of whether Sweden needs a military,” she told the newspaper. “It’s pretty male-dominated. As a woman, and as a feminist it’s going to be very interesting.”

Sweden’s basic training lasts three months and was first offered in 2011. The courses held in various locations across the country, with the Armed Forces (Försvarsmakten) holding recruiting drives three or four times per year.

Candidates are admitted after first taking a web-based survey that assesses their suitability and then going through a more thorough admissions test.

Those who complete basic training are then eligible to be employed by the military as either soldiers or sailors. Completing basic training allows new soldiers to continue onto officer training programmes or take a tour of duty with the home guard.