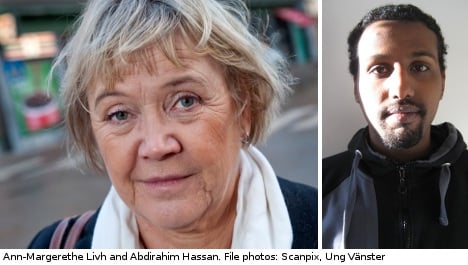 “We can confirm that a Swedish woman has been shot. She is alive and has spoken to the Swedish ambassador. She is at the field hospital of the African Union Mission in Somalia and will be transferred for treatment in Nairobi,” Camilla Åkesson Lindblom, spokeswoman at the foreign ministry, told The Local.

The injured woman was identified as Swedish politician Ann-Margarethe Livh of the Left Party.

Local journalist Hamza Mohamed told The Local on the phone from Mogadishu that Livh was injured near the University of Somalia, where staff confirmed she had given a guest lecture.

“She was leaving the premises and was fifteen steps outside the university compound when men in a tinted (window) car opened fire,” he said.

Local Stockholm newspaper Norra Sidan also reported on Wednesday that Abdirahim Hassan had died in Somalia. His family confirmed the death. Hassan was a member of Sweden’s Left Party, which referred all questions to the foreign ministry when contacted by The Local.

“We cannot confirm that a Swedish man has been killed. The circumstances remain a bit unclear,” Åkesson Lindblom said.

Abdirahim’s brother confirmed to SR International that his brother was travelling in the same car as Livh. A third person, believed to be a bodyguard, has also been reported as killed.

A local reporter, Abdiaziz Mohamed Dirie, said witnesses saw the woman hit by a bullet or bullets in the chest – “But I don’t know if it was the right or left side,” added Mohamed Dirie.

The gunmen escaped the scene of the attack, according to local news sources.

War-ravaged Mogadishu is one of the most dangerous cities in the world, despite Somalia’s al-Qaeda-linked al-Shabaab fighters pulled out of their fixed positions in the capital two years ago.

Foreigners usually travel in Mogadishu in armoured vehicles or with armed escorts.

“The white woman was bleeding, they rushed her to hospital, and then the police came and cordoned off the area,” witness Muktar Nure told the AFP news agency.

No one has claimed responsibility for the attacks, but al-Shabaab fighters have carried out a series of bombings, attacks and killings aimed at overthrowing the internationally backed government.

Despite recent fighting in the ranks of the al-Shabaab and the loss of a series of towns they held to a 17,700-strong African Union force, analysts warn that the extremist group is far from defeated.

In June, al-Shabaab suicide commandos carried out a brazen daylight attack on a fortified United Nations compound, and last month a suicide car bomber attacked a Turkish embassy complex in the city.

CRIME
Bomb attacks: ‘Sweden is either described as a war zone or heaven on earth’
Url copied to clipboard!