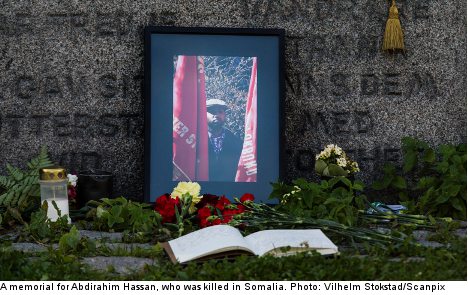 On Thursday, the Somali government said three people had been arrested for the attack, according to Norwegian news agency NTB.

In addition to 24-year-old Abdirahim Hassan, an active member of the youth wing of the Left Party, a Somali security guard was also killed in what is believed to be an attempted kidnapping.

Ann-Margarethe Livh, who represents the Left Party on the Stockholm city council, was injured in the ambush and is being treated at a hospital in Nairobi for gunshot wounds.

Security forces in Somalia continue to hunt for two additional suspects believed to be involved in the planning of the attack, German news agency DPA reported.

Speaking with the TT news agency late Thursday night, spokespeople for the Foreign Ministry and the Left Party said they were unaware of the arrests.

The attack took place on Wednesday afternoon after Livh and Hassan were leaving the University of Somalia, where she had given a lecture. They pair were in the country to examine a democracy project run by the Left International Forum (Vänsterns internationella forum, VIF), a division of the Left Party responsible for international development work.

As they left the university, the vehicle they were riding in was attacked.

On Thursday, Hassan’s younger brother Elias Hassan, 21, told reporters in the Stockholm suburb of Husby that his brother “stood up for justice and believed in a peaceful world” and had “died for what he stood up for”.

Questions remain about what security measures the Swedish politicians had in place during their visit. While the security situation in Mogadishu has improved in recent years, it remains a very volatile city, according to security experts.

Ahead of the trip, VIF determined that there were no security threats to the Swedish delegation in the area in which they were scheduled to travel. While the delegation had hired security guards to accompany them, reports suggest that they were only escorted by local police at the time of the attack.