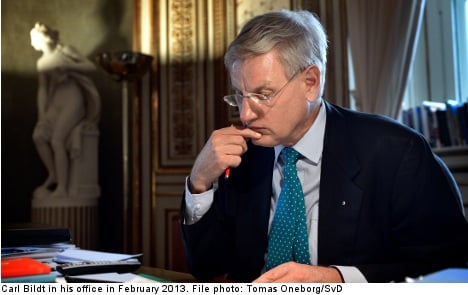 “I have a hard time coming to any conclusion other than that a deadly chemical substance has been used in the attack carried out by the regime’s forces between Tuesday and Wednesday on this opposition-controlled area,” Bildt wrote on his official blog on Friday.

The statements come as the international community struggles with how to respond to claims by opposition forces that more than 1,000 people were killed in al-Ghouta, an area east of the Syrian capital Damascus where there is a known opposition presence.

Bildt noted as well, however that “not all questions have been answered” about the incident, which the regime claims was a “fabrication” by the opposition, with Russia hinting that the opposition may actually be behind the attack.

Looking at the facts a chemical agent with horrible deadly consequences has been used near Damascus. UN must inspect rapidly and report.

He further expressed his hope that UN weapons inspection teams would be able to reach the area “as quickly as possible” in order to investigate the attack, which some experts believe may have involved a nerve agent such as sarin, the Guardian newspaper reported.

“In Damascus, they must realize that this with all probability will lead to an intensification of considerations by the international community to take some form of military action,” Bildt added.

Speaking in Seoul on Friday, UN Secretary General Ban Ki-Moon emphasized the importance of a swift investigation into the alleged chemical gas attack.

“Any use of chemical weapons anywhere, by anybody, under any circumstances, would violate international law,” he said, according to the BBC.

“Such a crime against humanity should result in serious consequences for the perpetrator.”