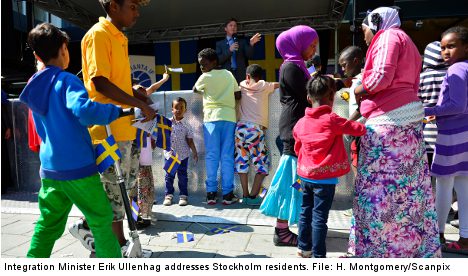 The report, published by a researcher at Örebro University in central Sweden, compared people who came to Sweden between 1990 and 2000 and native Swedes – all of a working age.

“After the first year, the result show that a foreign-born person in Sweden has much higher probability of being on welfare benefits – three times higher than Swedes. Both groups are then as likely to remain on welfare benefits for the next two years,” Daniela Andrén told The Local

“But the most surprising thing we found was that in the fourth year, the statistical effect disappeared for both groups.”

The study was extremely technical, she explained, and was based on a new statistical model that took into account non-observable characteristics including the persons’ personality, attitude, social norms and culture. These were measured together with observable factors including gender, age, work experience, and even the area they lived in Sweden.

The team studied 1 percent of the entire population against 10 percent of the country’s immigrant population. The decade that the measurements were recorded was a period of economic crisis, with a high unemployment rate.

The report concluded that it is important for politicians to design target measures to get immigrants into the work force quickly.