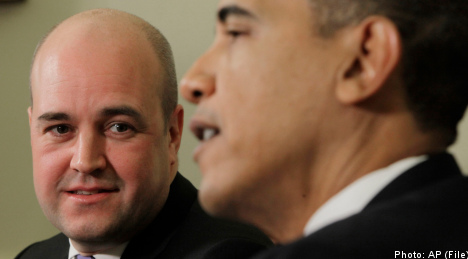 The US President jets into Stockholm on September 4th for the first bilateral visit by a sitting American President to Sweden. A huge security operation is being planned with around 2,000 police officers being drafted in to protect Obama.

The TT news agency reports that the figure of 24 million kronor ($3.7 million) is “conservative” with the White House also sending over their own team of Secret Service bodyguards to accompany the president.

“We are calling in police from all over Sweden,” said Håkan Wall, the commanding chief of the National Criminal Investigation Department (Rikskriminalpolisen) in charge of the state visit, told TT.

There will also be a heavy presence of Säpo (security police) officers on duty.

President Obama will arrive in Stockholm on September 4th and stay overnight before departing on September 5th to the G-20 Summit. Prime Minister Fredrik Reinfeldt has invited the leaders of the four Nordic nations to have dinner and discuss issues with the US leader on his sole night in the Swedish capital.

Sweden has been labelled a “high risk” country by the US Security team due to the historic murders of Prime Minister Olof Palme and Foreign Minister Anna Lindh.

Reinfeldt told The Local earlier this month that the state is well prepared for Obama’s arrival.

“I think we have quite some experience with having high-profile people in Sweden. But of course we work together with the security personnel with the Secret Service and the White House in preparing for this meeting.”

He added that the historic visit will likely have an impact on locals during Obama’s brief stay.

“It’s going to be a security test for Sweden, not the least how it will affect traffic for Stockholmers,” he said.