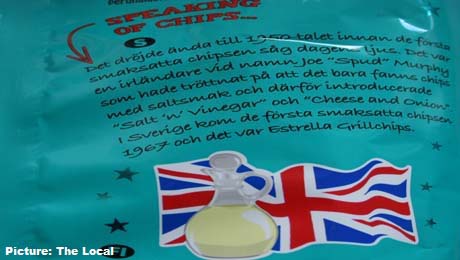 Niall Mullins, 37, who resides in Borås, western Sweden, wrote an angry email to Estrella demanding they replace the British flag with an Irish one instead. The packaging on the brand's Salt & Vinegar chips tells the story of “Irishman” Joe 'Spud' Murphy who invented the flavour with a Union Jack underneath the tale.

Mullins was irked by the accompanying picture after the text which said; “It was an Irishman named Joe 'Spud' Murphy who had grown tired of salt flavoured chips so then launched Salt & Vinegar and Cheese and Onion.”

He told Irish website TheJournal.ie; “I suppose they just broke me one day, I just got a bit mischievous because I had time on my hands and I didn’t expect an answer from them but they got back to me within two days.”

Estrella replied to Mullins, who has resided in Sweden since 2001, that they apologised “profusely” for the error and will “correct this as soon as the next batch goes to print.”

Mullins added that he is looking forward to seeing the new Irish themed Salt & Vinegar chips, known as crisps in his native Ireland, on the shelves and said he hopes Estrella will send him some free packets in the mail for bringing the error to their attention.