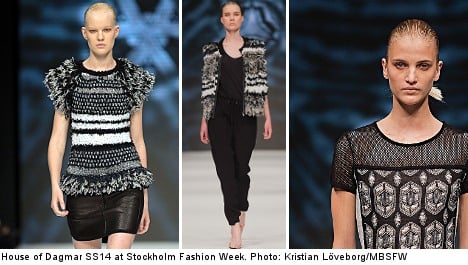 In the stifling fashion pavilion tent in Stockholm’s Kungsträdgården, House of Dagmar’s SS14 collection was, in more than one way, hotly anticipated.

Since 2005, Dagmar – a label run by three sisters – has been carving out a path in Swedish fashion that perfectly mirrors the Scandinavian penchant for less-is-more with a modern, refined femininity. There was more of this in Monday’s spring/summer 2014 show.

This collection was for the city. Inspired by artist Rebecka Andersson’s art work of Stockholm’s safer and rougher areas – Nolli Stockholm – House of Dagmar refined any notion of urban chaos and created rather a level playing field. Carefully combining niceties and wealth in smooth, pure cream knitwear and soft tailoring with fuzzy jumpers mimicking the artificial light of the night when mood changes and in every city, people present a blurred version of themselves.

In fact, the subtle lines in Dagmar’s collection were just that, subtle. This wasn’t a literal expression of metropolitan highs and lows with graffiti etchings. Instead, ikat prints mimicked Andersson’s mapping and played to the idea of the urban jungle as a fusion of cultures and styles whilst holographic square heels injected a hazy mix of summer sunshine and transition into darkness. Dagmar’s woman makes twilight her time to shine.

The colouring was urbanely placid – a lot of black – but there were hints of Stockholm’s pastel façade in road-lined soft, biker-style jackets.

Overall, it’s this wearability and mood that makes Dagmar so appealing. Add to that the collection’s hidden gems and much like a city-scape, things got more interesting.

There were zips in unexpected places – on the edge of a fine, sheer-layered dress – and raw edges that added another dimension to the staple leather jacket or covetable evening gown in nude.