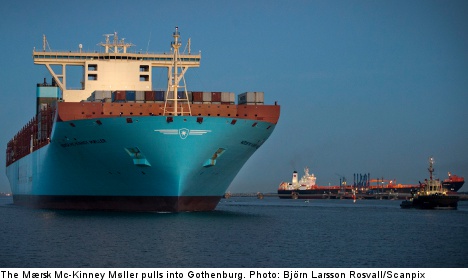 The Mærsk Mc-Kinney Möller docked at Gothenburg’s Skandia harbour just before 6am, its final stop on an 84-day journey.

IN PICTURES: The world’s largest ship in Gothenburg

It took crews about an hour to ensure the 399-metre long ship landed gently at the pier’s edge. The ship, which is too wide to fit through the Panama Canal, can carry up to 18,000 containers.

Despite its size, the ship is reportedly easy to steer, able to come to a stop in just ten minutes, according to the TT news agency. The ship entered service in July 2013 and is named Mærsk Mc-Kinney Møller, after the CEO of Danish shipping firm from 1965 to 1993.

Check out this gallery of pictures from the ship’s landing in Gothenburg.