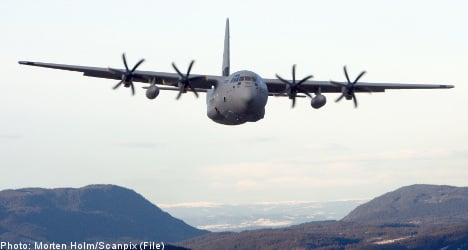 The new report by the Swedish Accident Investigation Authority (Statens haverikommission) officially cleared up the cause of the accident, in which a Hercules aircraft smashed into the side of the Kebnekaise mountain in northern Sweden last March. Details of the classified report were published in the Norrbottens-Kuriren newspaper (NK) on Tuesday.

The report claimed that the ground control team and the pilots’ lack of knowledge as the key reasons the plane went down, killing all five Norwegian passengers,

“It was these weaknesses and the mistakes of the individuals that can be deemed as the cause behind the accident,” the Investigation Authority wrote in the report, according to NK.

At the time of the crash, the Hercules was participating in the Cold Response military training exercise taking place over northern Norway which was scheduled to run from March 12th to March 21st and included 16,000 soldiers from 15 countries.

Two days later, wreckage as well as body parts from the five deceased crew members, were found on the east and west sides of the Kebnekaise Massive at an altitude of more than 1,500 metres.

The report also noted that the crew may have misinterpreted the instrument readings on board the aircraft as it flew near Sweden’s highest peak. It added that the pilots were recorded discussing the how high they should be flying, and even discussed the height of the mountain while assessing the dangers of flying low.

A crew member even said “It’s the highest mountain in Sweden, right?” just 14 minutes before the crash.

In short, the plane was flying too low, and the pilots had set their terrain warning system to a level which meant they received no warning they were on course to collide with the mountain.

Staff members at the Investigation Authority refused to comment to the paper about the report.