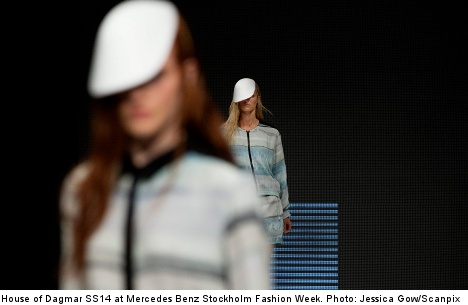 Design graduates from the Swedish School of Textiles in Borås set the catwalk alight on Tuesday with a dazzling display of carnival and rebellion.

A seeming dichotomy of Scandinavian cool versus hot Latino actually worked here. And rather flawlessly too.

House of Dagmar avoided a literal expression of metropolitan highs and lows with graffiti etchings, but instead, ikat prints mimicked mapping and played to the idea of the urban jungle as a fusion of cultures.

The Local’s Ann Törnkvist reviews J. Lindeberg’s latest offering at Stockholm Fashion Week, where the women took a subdued backseat to the boys parading in plums, khaki and midnight blue.

Whyred’s love of contrasts was evident on Tuesday, not in the differences between men and women – as the collection was, as to be expected, largely androgynous – but in a smart vs. casual approach for the boys with undertones of youth discontent.

The crowds inside and out were a tell-tale sign this was a biggie. The line-up’s last and streamed live, Tiger served up a bit of Scottish punk. Feeling that autumn chill? Kilts over trousers could be the answer.

Shocktastic Miley Cyrus is not the only one who can do morally questionable things to teddybears. As Stockholm Fashion Week wrapped up, Swedish designer Bea Szenfeld put her patent paw to outlandish fashion.