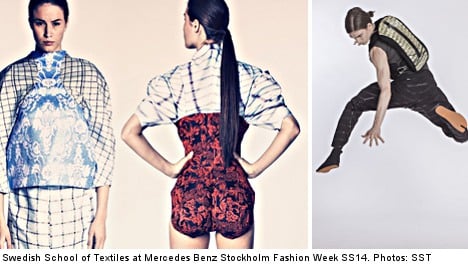 As ever with graduate shows, there was a buzz before the show; friends and fellow students, proud parents, eager editors and buyers spotting the next big thing. The only thing to be expected at a graduate show is the unexpected. And the Swedish School of Textiles did not disappoint on that count.

Imagine, if you will, a box of scraps full to the brim with fabric, glue, sequins, paints, maybe the odd used ice-lolly stick and sticky-back-plastic. Hand it to a child of glue-handling age and watch the magic unfold.

This is what in layman’s terms transpired in the Fashion Pavilion on the second day of Mercedes Benz Stockholm Fashion Week. I say this without any discredit to the graduates, in fact quite the opposite. The infinite imagination the textiles graduates put on show was awe-inspiring. The handicraft, technical skill and critical thinking that went into applying this imagination made the show even more enjoyable.

As indeterminate bass music pummeled the ears of the audience, bachelor degree student Gustav Falgén’s striking visual assault also commenced. Akin to a flash mob, six young strapping male models launched themselves down the catwalk as if about to embark on a wayward attempt at base jumping. Their attire? Mod slash nineties skinhead. Khaki, neon orange, bleached denim and braces beclothed a figurative army of lads in turn-ups and balaclavas – an unapologetic experimental emblem of youth and rebellion.

For the women in their experimental stages, Abril Vergara Lozano’s Soundscape Parade took over the whole audience with its sheer vibrancy.The colour was extraordinary and came in carnival costumes dripping in texture: a perspex sandwich board of holographic splatters, knitwear embellished with beading, a black vinyl gown made of single strips and a holographic Elizabethan-style neck surround. Lozano’s designs trumpeted something special; the idea of fashion as multi-sensory, all-encompassing and impossible to ignore.

The chinkling sound of Lozano’s wool and gold coin dress, which emerged like a woman lost in Ibiza for forty years – bedraggled and bohemian – was an instant hit with the audience. Smart phones hit the roof.

Elsewere, the beauty of Elias Högberg had me transfixed. The soft pastel tones and curved leather overlaid with plastic and flowers penned in black were beautiful. The red clay and pomegranate tones moved the collection away from being too white, too clinical, into something sumptuous and romantic.

Similarly Anna Margareta Svensson showed real promise in her careful palette and sharp clean lines. The latex? That just kept it the right side of youthful.

And Emelie Ahlnér’s holographic – a budding trend – laser-cut pieces showed impressive precision and construction techniques that Chalayan would be proud of.

All in all the Swedish School of Textile’s Exit 13 show was credit to the application of imagination and ideas. The often uninhibited designs proof that Sweden’s graduates are making their own way out, playing their own game and still dipping into the craft box every now and then. If this is Sweden’s fashion future, I’m excited.