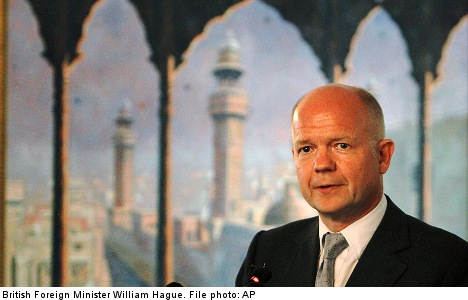 “The Foreign Secretary planned to meet with Carl Bildt, and Ministers Gunilla Carlsson and Karin Enström, to discuss topics such as Europe’s role in a global power shift and women, peace and security issues,” the British Embassy in Stockholm said in a statement on Tuesday.

“Talked with @williamjhague on Syria and other issues. In view of the situation we agreed to postpone his visit to Stockholm,” Bildt tweeted on Tuesday.

Hague will instead meet with his parliamentary colleagues back home in the UK, as the world community struggles to find a way to deal with increasing violence in Syria.

Time is of the essence. Every day without UN access is a day in which evidence can deteriorate or be hidden by those responsible. #Syria

After reports emerged that civilians had been killed by poisonous gas in a Damascus suburb last week, Hague and his international counterparts have urged Syria to allow entry to a UN fact-finding mission. That mission, led by Swedish weapons expert Åke Sellström, was attacked by snipers on Monday.

“The first vehicle of the Chemical Weapons Investigation Team was deliberately shot at multiple times by unidentified snipers,” the UN said in a statement issued from its headquarters in New York.

On Tuesday, UK Prime Minister David Cameron informed the public that he had asked MPs to cut short their summer holidays to deal with Syria.

Hague had been scheduled to speak at the Swedish Institute of International Affairs, as well as meeting with Swedish ministers.