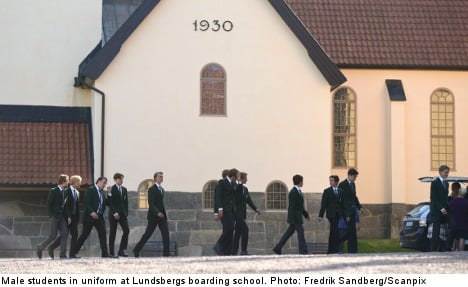 “This is horrendous news that we’ve received today, especially for all our students who are completely broken up. You’ve seen how they are crying and the shock that’s spreading among them,” Kajsa von Geijer, a member of the Lundsbergs board, told the TT news agency.

The comments come following news that the Swedish Schools Inspectorate (Skolinspektionen) ruled on Wednesday that the school’s operations will be temporarily shuttered following a hazing incident at the weekend in which two students were burned with an iron.

According to the TT news agency, the mood among the elite boarding school’s roughly 200 students ranged from despair and shock to outright anger. A number of students who left the school on Wednesday were in tears, while others expressed their outrage toward journalists and photographers gathered outside the school.

One Aftonbladet reporter said on Twitter she was called a “whore” by a member of the Lundsbergs student council when she asked for comment on the closure.

Von Geijer told reporters the board will now sit down with the school’s administration and review the decision.

“Our students should feel safe at school, that’s our primary mission and we’re going to do everything to ensure we can continue operations at Lundsbergs,” she said, according to TT.

Counselors were on hand at help the students deal with the news that their school would be closed just days after the autumn term began.

Students will be expected to leave the school during the day on Thursday and seek to enroll in schools in the home municipalities.

The Swedish Teachers Union (Lärarförbundet) welcomed the move to close the school.

“If you get these kind of indications you need to be forceful and show improvement. It’s quite clear that hasn’t happened and that’s something school leadership is ultimately responsible for.”

The closure of Lundsbergs marks only the second time the inspectorate has ordered an immediate shuttering of operations at a school in Sweden, TT reported.

Founded in 1896, Lundsbergs was inspired by British boarding school tradition and currently has an enrollment of around 200 students, around 60 percent of which are boys.