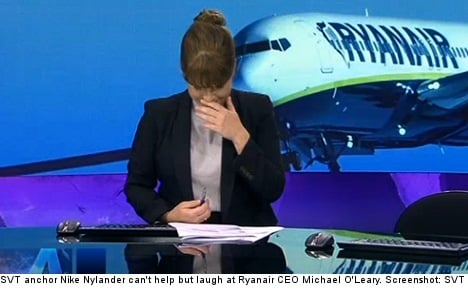 After delivering a no-nonsense introduction to a segment on O'Leary's denial of allegations that the budget airline had poor working conditions, anchor Nike Nylander was unable to keep a straight face when the camera returned to her.

The taped segment showed the colourful Ryanair CEO invoking the gestures and speech of a ghost in his attempt to illustrate that the complaints of poor labour conditions at the airline amounted to nothing but a fabrication.

"False, false, and misleading information, provided by people sitting in darkened rooms… ooohh," O'Leary said in the piece, waving his hands in the air.

As Nylander began to read her script following the clip, she was overcome with laughter.

"It was just totally absurd, it was so surprising that I just couldn't believe it," Nylander told The Local.

"It was the way Mr O'Leary impersonated a ghost doing the whole 'oooohhh' thing… The fact that CEO of big corporation does that when talking about working conditions of his employees just made me laugh."

Since the airing of the programme, Nylander has been flooded with warm messages from viewers around the country, many saying they're glad to see a newsreader with a human side.

But the veteran news anchor took her gaffe in stride, taking to Twitter to thank viewers who had shown their appreciation for the unexpected dose of humour she had brought to the evening newscast.

"Thanks for all the kind shout outs after my laugh attack tonight. It feels a bit better thanks to you," Nylander wrote.

While Nylander claims it was the first time she has burst out laughing during a news programme, she is adamant it will be the last.

"I'm usually in control, most of the news I read is very serious. While it's unprofessional, it could have been worse," she said with a laugh.

"I'm not sure if I hurt Mr O'Leary's feelings, but I'm glad to have put a smile on people's faces and kept them laughing."