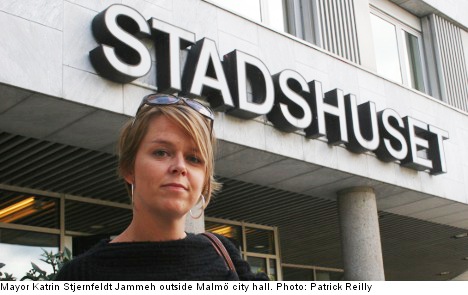 Katrin Stjernfeldt Jammeh, 39, is still getting her feet under the table since taking office on July 1st. Her predecessor was in charge for 19 years and became a part of the furniture at Malmö town hall (Stadshuset).

Her bare top-floor office has recently been given a clean coat of white paint. A handful of paintings are propped up on the floor, waiting to be hung. With one year until the next elections, decorating may not be top of her agenda.

Will the Social Democrat politician spend 80 hours a week in this office, just like her predecessor claimed he did?

“He’s backed off and I know that I can give him a call if I need his input on something,” she says about the 69-year-old, who since stepping down has cut down his working week on the municipal board to 40 hours and now keeps clear of the town hall.

“I don’t count the hours, but I work more than I’m willing to admit. I work as much as I possibly can while also having two children,” she confides.

Children’s education is much higher on her agenda than decorating her new office. Before politics, she worked as a school councillor. Later, she transferred the responsibility for how individual schools perform from the small city districts to municipal level.

“The Swedish school system segregates us based on the background of your parents,” Stjernfeldt Jammeh explains. “Background has become more important today than it was ten or 15 years ago. For me that is going in the wrong direction.”

And it affects her town – Sweden’s third largest and most multicultural – disproportionately.

“As a local politician, I can see how the system affects the students in Malmö. It’s a special challenge because of the nature of the city,” she says. “In the long run we need more teachers.”

Malmö is a very different city from when Reepalu took charge almost two decades ago. The Öresund Bridge, which links Sweden with Denmark, tied the town to Copenhagen, creating a key region in Scandinavia. Then there is Malmö University, which has transformed the capital of Skåne and attracted a new wave of foreign arrivals.

But that progress has come at a cost, with the city frequently criticized for how it integrates new immigrants and its level of crime. Does Malmö have a crime or an image problem?

“To be honest we have both,” Stjernfeldt Jammeh says matter-of-factly.

“It’s a big city with 300,00 inhabitants so we have the problems with crime like Stockholm and Gothenburg has. When I speak to the national press, they always start by asking about crime,” she says.

Last year, the trial of serial sniper Peter Mangs once again put the national headlights onto Malmö. His shooting rampage, mostly at people with foreign backgrounds, instilled fear in the hearts of many Malmöites – who testified to staying at home, or not walking their dogs at night, as the shootings intensified.

“During the Peter Mangs period, I was frustrated that I had to debate segregation at the very moment when he was shooting people,” Stjernfeldt Jammeh recalls. “The question was: Does it mean you have a segregation problem?”

“When the Laser Man (the nickname of the convicted serial shot John Ausonius) was shooting in Stockholm in the nineties, the same questions weren’t asked. When it happens here the reaction is different,” she elaborates.

“I want to improve the city and that can’t happen if I don’t face the facts, but I want a fair and correct debate.”

Fair and correct, however, are words that the town’s Jewish community has been searching for since anti-Semitic attacks picked up in Malmö. From Stjernfeldt Jammeh’s seventh floor office you can easily see the city’s synagogue. Reepalu’s latter years in office were marred by controversial remarks he made about the Jewish community supporting Israel’s offensive on Gaza a few years back, which provoked irritation among the Malmöites with Middle Eastern backgrounds.

“He tried to explain what he meant, he apologized and for me that’s important,” says the new mayor, apparently keen to move away from the stain that has proved difficult to rub off. “(Reepalu) started a discussion with the Jewish community and by the time he left they were on good speaking terms.”

“I look forward to cooperating with the Jewish community,” she adds.

Next year’s elections aren’t far from her mind and the new mayor admits she’s eager to get on the campaign trail and “fight for different values”. Tackling the city’s housing crisis and expanding the Öresund region are among her goals

“In the long run, we don’t want Öresund to be only a labour market, but that we take part in the culture, and don’t really think about the border,” says the mayor, who also speaks Danish – a legacy, she says, of watching too many Danish cartoons as a child.

Stjernfeldt Jammeh, who cites Burmese opposition leader Aung San Suu Kyi and American civil rights activist Rosa Parks as inspirations, is the first woman to take charge of Sweden’s third city. While her pay packet as mayor now stands at 71,451 kronor ($10,800), she says “you don’t do it for the money”. Becoming the country’s first female prime minister isn’t part of her master plan though.

“No! I love Malmö,” she says. “Local government means being closer to the people.”