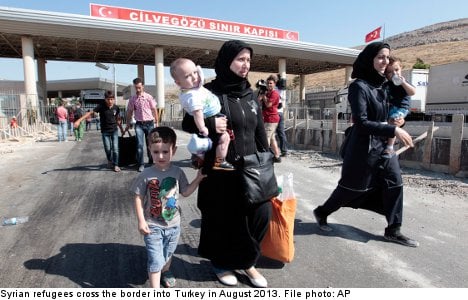 Sweden is the first country in the EU to offer permanent residency to refugees from Syria, news agency TT reported.

The decision covers all asylum seekers from Syria who have been granted temporary residency in Sweden for humanitarian protection. They will now receive permanent residence permits, the Swedish Migration Board (Migrationsverket) announced on Tuesday.

Previously, around half of Syrian asylum seekers had been granted permanent residency, with the remaining half receiving three-year residence permits.

The assessment is based on whether a person has an individual or general need for protection. As the situation in Syria has deteriorated and is now “extreme and marked by general violence” with no solution in sight, the agency has judged the poor security situation in Syria to be permanent.

The decision means that the roughly 8,000 Syrians who have temporary residency in Sweden will now be able to stay in the country permanently.

They will also have the right to bring their families to Sweden.

While Malek Laesker, vice-chair of the Syrian Arabian Cultural Association of Sweden (Syrisk arabiska kulturföreningen i Sverige), welcomed the decision, he also warned it could create problems.

“The fact that Sweden is the first country to open its arms is both positive and negative,” he told the TT news agency, explaining that it may be a boon for the growing people-smuggling market.

SEE ALSO: Why I am ashamed of the UK's response to refugee crisis

He also expressed concerns that the move will add more fuel to the already inflamed debate about Sweden's immigration policies.

“We already have a crisis around that issue in Sweden. I hope that our politicians solve it in a nice way,” he said.

In 2012 and 2013, a total of 14,700 Syrian asylum seekers came to Sweden. Together with Germany, Sweden is the EU country which has accepted the highest number of asylum seekers from the war-torn country.

In its statement, the Migration Board warned that asylum seekers who may be guilty of war crimes or crimes against humanity for their actions in Syria would lose their right to be classified as refugees or in need of protection.