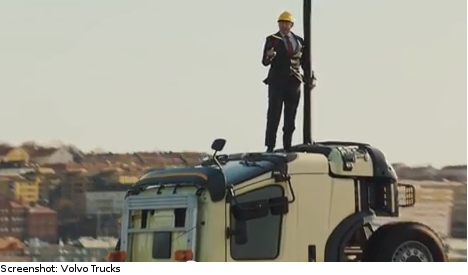 “Sure I had real butterflies in my stomach before filming and began to wonder what I had got myself into. I am no mountain-climber and I don’t like heights,” Nilsson said in a company statement.

“But I had promised to take part and then I can’t just back out,” he added.

The film, above, entitled “The Hook”, features Nilsson standing on the front end of a Volvo FMX truck which had been hoisted by crane some 20 metres above Gothenburg harbour.

Nilsson also revealed that the inclement Gothenburg weather presented its own challenges, with temperatures hovering around 8C and winds of 10 metres per second.

“My hands were really cold there for a while,” he said, revealing that the daring film required a number of takes to perfect.

The theme of the film is to demonstrate that the truck’s front towbar can endure the toughest of challenges, including bearing the vehicle’s 15 tonne weight.

This is not the first time the Swedish firm has employed a sense of the spectacular to promote its vehicles and a 2012 film entitled “The Ballerina Stunt” has been seen by some 7 million viewers to date.

Volvo Trucks has revealed that “The Hook” is the first in a series of films which it hopes will take the market by storm.