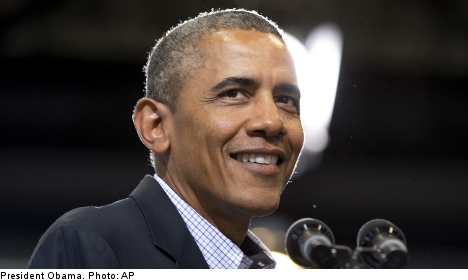 “Obama’s visit is first and foremost a matter of prestige for the Swedish government… which want to be seen as a strong partner of Washington,” said Erik Brattberg, a political scientist specializing in transatlantic relations at the Stockholm-based Foreign Policy Institute.

“The visit to Sweden will therefore be a confirmation that they have achieved just that,” he added.

IN PICTURES: See the president’s itinerary in pictures

During the course of his day in Stockholm, President Obama will visit the Royal Institute of Technology (KTH) to see the latest research in energy solutions and KTH president Peter Gudmundson says he wants to show off the institute’s work on research and innovation.

“It’s important for us to be noticed both nationally and internationally. We hope to increase opportunities to establish new partnerships with universities and companies and may also raise interest for those seeking to apply to study at KTH,” Gudmundson said.

The US already cooperates with Sweden on green energy solutions and the Swedish environmental technology sector, but according to Brattberg it is doubtful whether the presidential visit will lead to any new initiatives in this area.

Another important item on the agenda is the TTIP free trade negotiations between the EU and the US, but this is more a matter of the US seeking Swedish support to persuade the rest of Europe to agree to a contract.

According to Brattberg negotiations can however have major consequences for the export of environmental technology and Swedish exports to the US in general.

President Barack Obama is scheduled to travel from Washington to Stockholm at 8.45pm local time (2.45pm Swedish time), according to the White House.

The American press has been invited to watch the President take off from the White House lawn by helicopter for onward transport to Andrews air force base and the Air Force One flight to Sweden.

Flight time can vary, but it usually takes more than eight hours to fly between Washington and Stockholm. Obama is due to leave Sweden on Thursday afternoon after a busy two-day schedule.