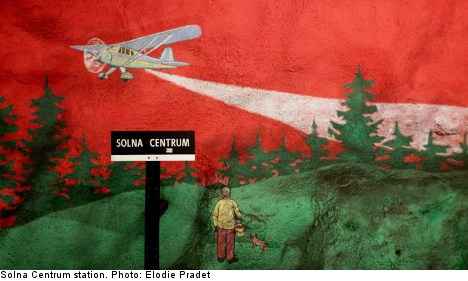 Welcome to the Swedish capital’s metro system, where 150 artists have exercised their talent on some 100 stations along the 110-kilometre network to distract, amuse or intrigue the tens of thousands of commuters who ply the route daily.

The subway “becomes an important place in people’s lives,” said artist Ulrik Samuelson, 78, whose 1977 design for the central Kungsträdgården stop remains a favourite.

The Swede, who has exhibited in galleries from New York to Paris, liked the idea of targeting an “uninitiated” audience.

He created a subterranean wonderland with green, red and white shapes and stripes, as well as busts and building fragments, all alluding to a 17th-century palace that once stood above the site.

Ten years later, he added dripping grottoes and tropical plants as well as statues and fragments from an old city district demolished in the 1950s.

“This is our Forum Romanum, or Forum Stockholmium maybe,” said Johanna Malmivaara, an art guide for the city metro, proudly.

ALL ABOARD: The Local’s top ten Stockholm metro stations in pictures

Samuelson’s design is part of the permanent exhibition, some of which dates back to the 1950s when the underground first opened.

When it was extended in the ’60s and ’70s, there was concern that people unused to travelling underground might be scared, like they would “come to the underworld,” said Malmivaara.

So the Stockholm regional government suggested ” ‘why not make it pleasant and decorate the underground instead’,” said Malmivaara.

Not all locals still pay attention, glued instead to their newspapers or smartphones.

But the art has also turned Stockholm’s metro into a magnet for tourists and, at times, celebrities — like American pop diva Madonna, who used shots from the Hötorget and T-Centralen metro stations in the video for her 1998 hit “Ray of Light”.

“We’ve never seen anything like this before,” said Californian visitors Fay and Paul Krivonos, who found another famously decorated subway, the Moscow metro, “filled with pompous and propaganda art” by comparison.

Themes vary widely. The centrally located T-Centralen station is pure mid-1970s “agitprop” – art-cum-propaganda. Dozens of painted workers crowd onto the ceiling with one crushing Article 32, a much-reviled chapter in the old statutes of the Swedish Employers’ Confederation permitting companies to hire and fire at will.

Seven of the stations are reserved for displays that change each year. One is the Odenplan stop, coveted as a career launching pad for four new art school graduates hand-picked by the metro’s art group.

Yet commuters were foremost in the minds of project developers and many artists.

“Public art is available to a whole lot of people who have never even approached a gallery before,” said Samuelson.

And when the long season of ice and snow on above-ground stations causes major delays across the network, Malmivaara joked, “It is our way to say ‘Excuse us for the delays in the winter’.”