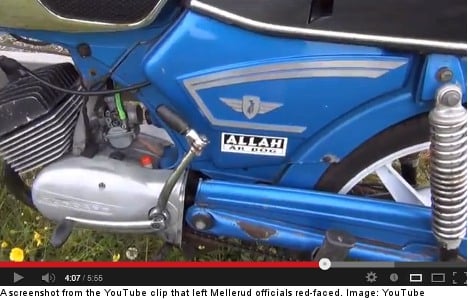 The six-minute YouTube clip was put up on the Mellerud municipality Facebook page to promote a classic car meet up in Sunnanå Hamn on the shores of Lake Vänern.

“This is how things looked earlier in the summer,” the text accompanying the post read.

The video showed a number of classic cars, but at about the four minute mark, the camera zoomed in a decal on a motorbike that read, “Allah is gay” (Allah är bög), the Expressen newspaper reported.

When alerted to the fact that the clip featured a decal’s with such a controversial message, a spokesman for the municipality was left red-faced.

“If we’d seen the whole clip, we would never have put it up,” Lars Nilsson told the newspaper.

He explained that the clip was quite long, having been compiled by someone who had recorded the footage at a previous classic car event.

Officials with the municipality thought the clip might serve as good marketing for the popular car events.

While Nilsson has since removed the clip from the Mellerud Facebook page, a member of the local council expressed his regret that no one had properly vetted the clip for potentially controversial footage.

“We don’t want to put out things like that that don’t belong here,” Robert Svensson told Expressen.