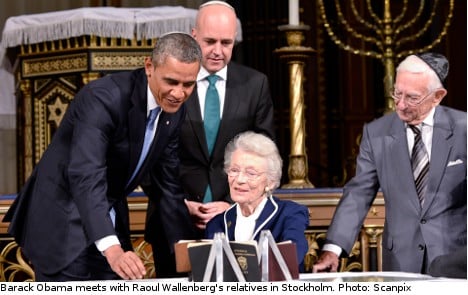 Wallenberg was posted as a Swedish diplomat to Nazi-occupied Budapest in July 1944 and rescued tens of thousands of Jews by issuing them protective passports in the final months of the Holocaust.

He went missing after his arrest by Soviet forces in Hungary on January 17th, 1945.

Obama, who met with Wallenberg’s relatives during a visit to Stockholm on Wednesday, vowed to raise the issue with Russia on the sidelines of a G20 meeting in Saint Petersburg on Thursday and Friday, Wallenberg’s 92-year-old half-sister Nina Lagergren told Swedish daily Svenska Dagbladet.

“‘I’m going to see Putin, and I plan to raise this with the Russians’ he told us,” Lagergren said after meeting the US leader in Stockholm’s Great Synagogue where he viewed Wallenberg artifacts, including his phone book, diary and Swedish passport.

Soviet and later Russian officials have claimed the Swede died of heart failure in Soviet custody on July 17, 1947, but have never produced conclusive proof.

Sceptics have questioned that version, with some saying he was executed. In 2000 the head of a Russian commission of investigation said Wallenberg was killed in Lubyanka, the notorious building where the KGB security services were headquartered.

At a ceremony in Budapest in August 2012 kicking off a year-long commemoration of the 100th anniversary of Wallenberg’s birth, Swedish Foreign Minister Carl Bildt said his country had never officially contested the Russian accounts but maintained there was “insufficient evidence to draw any firm conclusions.”

Two researchers with a Swedish-Russian working group on Raoul Wallenberg said last year they had uncovered a document showing that after a brief period of increased openness shortly before the 1991 fall of the Soviet Union, the KGB security service and its Russian successor the FSB had begun actively working to block the Wallenberg probe.

The document, found in the Swedish foreign ministry archive, also showed the Swedish embassy in Moscow had early on been informed of the Russian stumbling blocks but never officially protested.

Wallenberg’s half-sister Lagergren said she thought Obama might be able to get some answers from Russia.