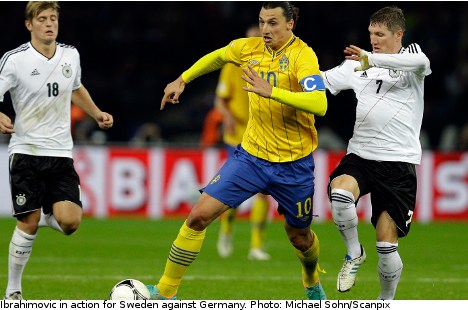 Trapattoni was in charge of an Italy side that drew 0-0 draw in Lithuania on September 1, 2001 — the same day a Jason McAteer goal fired Ireland to a famous victory over Holland at Lansdowne Road during their successful campaign to reach the 2002 World Cup in Japan and South Korea.

Since then, Dublin has not witnessed a similarly memorable event, with Armenia — then ranked 42nd in the world — in October 2011 the highest-ranked side Ireland have beaten since Trapattoni become manager.

In fact, Ireland have not beaten a team ranked higher than 30th, where Friday’s opponents Sweden are placed, since that victory over the Netherlands.

But with Trapattoni insisting his side require four points from the upcoming Group C double-header against Sweden and Austria, Friday would be an ideal time to correct that statistic.

“Four points is the minimum,” said the Italian, who is looking to lead Ireland to a third major tournament play-off in succession.

“We think we can win one game. Our team is not inferior. I will remind the players what they did against England (a 1-1 draw in May) and Spain (a 2-0 defeat in June).”

Ireland enjoyed a relatively comfortable night in the return fixture in Stockholm last March, with goalkeeper David Forde only pushed into serious action late on in the scoreless draw when the hosts went for broke.

Since then, Erik Hamrén’s men have lost to Austria and just edged past the Faroe Islands, leaving Sweden, Ireland and Austria level on 11 points, five behind runaway leaders Germany.

“Sweden are not weak, but the centre-backs are slow,” Trapattoni said.

“They’re tall and good but we’re maybe a bit fast for them. They’re not weak but no team is unbeatable.”

While Trapattoni has been boosted by the return from injury of Millwall goalkeeper Forde and has talismanic defender Richard Dunne eyeing a first competitive appearance since Euro 2012, Sweden are struggling in the defensive area of the field.

Celtic’s Mikael Lustig is a doubt after injuring his ankle in his club’s victory over Dundee United last Saturday, while Andreas Granqvist is suspended and Ramus Bengtsson has a thigh problem.

Further forward, however, they welcome back Spartak Moscow midfielder Kim Källstrom and up front they can count on the irrepressible Zlatan Ibrahimovic.

The Swedes believe victory is required on Friday night, and with a trek to Kazakhstan on Tuesday and the visits of Austria and Germany in October, they

have a daunting schedule ahead.

But Jon Walters, who played for 90 minutes in Stockholm, insists the home side will go all out for three points that could remove Sweden from the play-off race.

“Draws tend to be good results away from home and the draw in Stockholm was a great result, but at home the emphasis is on us to attack a bit more,” said the Stoke attacker.

“It would be great to give the crowd that win and it would set us up nicely for the game on Tuesday (in Austria).”