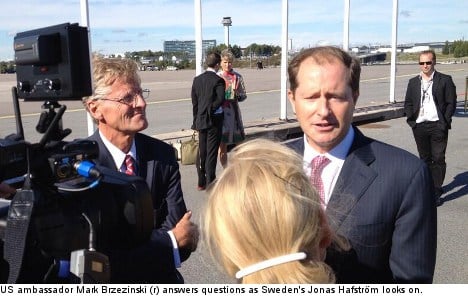 With the roar of Air Force One still ringing in people’s ears, US ambassador Mark Brezinski lingered on the runway to speak with reporters about the US president’s “historic” visit to Sweden.

He described the hectic preparations as a “labour of love” that has paid huge dividends for both countries.

TL: How do you feel about Obama’s visit to Sweden?

MB: I feel awesome! Our president was genuinely happy to be here. And I just loved being part of that.

TL: How do you think Stockholm residents reacted to having a sitting US president visit their city for the first time?

MB: The true outpouring of support and love and admiration that you could feel on the streets of Stockholm was amazing. It was genuine, it was not planned, it was not staged, and nothing beats that. It says that there is something very special about a presidential visit.

TL: What topics prompted the most difficult discussions?

TL: Why did this visit take place?

And there’s nothing like bringing people together. You can only do so much via telephone, international meetings, and email. There’s nothing like sitting down and having a real comfortable, genuine conversation about tough issues.

TL: How has this visit affected President Obama’s impression of Sweden?

MB: Let me tell you, he has great knowledge of Sweden. I was deeply impressed. He knows the history of the work and leadership the Swedes have shown in multilateral institutions around the world and also embraces the really constructive engagement the Swedes have shown over time on foreign policy challenges. I think he leaves with more of a deep sense about that.

The fact that the prime minister pulled together this wonderful dinner last night with leaders from the region shows that it’s not just about US-Sweden, but about US-Nordics, US-Northern Europe, and US-Europe as anchor partners for engagement around the world, and I think that he leaves with a deeper sense of that.

And at the base of the stairs, he told me that this was a great visit.

TL: What’s the most important thing to come out of this visit?

MB: Closer collaboration and understanding between us as partners; knowing what is important to each of us, what drives decision making, what gets us to a better place collaboratively in all the different places that we’re working on together, whether it’s Afghanistan or other challenges.

We are in a better place today than we were 24 hours ago thanks to this visit.