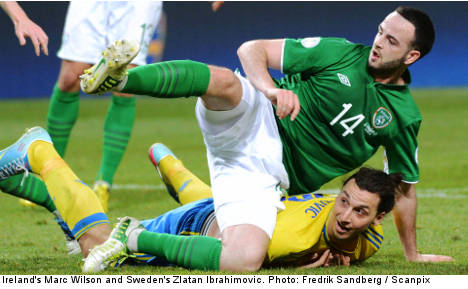 As one of the many to leave my native land in recent times I’ve grown used to hearing the phrase uttered by fellow “Paddies” residing on foreign turf: “There’s nobody more patriotic than the Irish abroad.”

As oxymorons go, it takes some beating. The phrase particularly springs to mind when your country of birth is drawn against the one you now call home in a football match.

Nothing brings out your inner William Wallace than a clash on the sporting stage. It’s a reminder of what you’ve left behind, who you were, where you are now and what you’ve become.

You may leave friends and family at the airport but for many immigrants the biggest loss is a sporting one. Namely, following your local team or, if you’re good enough, playing for them.

Of course, modern technology means you can keep up and read your local newspaper online. You might even get lucky and be able to stream your favourite club’s games. The more obscure the team or, for that matter, the sport you adore (shinty anyone?) then the more remote your chances of staying up to speed.

That is unless your idols are Arsenal, Liverpool or Manchester United. Sweden adores the English Premier League almost as much as Ireland does where its only real competition comes from domestic sports (gaelic football and hurling) for mass attention.

Inevitably, over time the enthusiasm you had fades a little on the local level at least. This was brought home to me recently when my hometown club (Drogheda United) was drawn against Malmö FF in a Europa League tie.

You might think it was a tough decision to decide who to support. It wasn’t. I’ll never be a local in Malmö and and have been away from home for long enough to feel like a foreigner there too. All I wanted to see was a good match.

Which is why the big national occasions tend to get that patriotic pulse pumping once again. Hej, dig out that tricolour and let’s hit the nearest Irish pub.

Irish football fans abroad are known for their devotion to the boys in green. Take the Dubliner residing in Australia who snapped up the TV rights for Ireland V Sweden just so he could watch the important match.

“The football team is the one everyone supports,” said David Feeney, the Irishman broadcasting the match down under. Few could disagree with that sentiment.

In Sweden the Irish community is small, approximately 2,000, and equally football mad. Being Irish here means usually having to explain to locals you’re not English or, on the odd occasion, from Iran which apparently sounds similar to Swedish ears. It’s an easy mistake to make…

Sport has been one of the main ways my compatriots have stuck together overseas. A flip side to mass emigration is the export of Irish culture with gaelic football clubs springing up everywhere including Sweden.

Playing gaelic isn’t for everybody, myself included, but following the national football team practically is. So when Ireland were drawn against Sweden in World Cup qualification it brought up a whole range of emotions. Primarily confusion plus a dose of guilt.

The former is for obvious reasons while the latter stems from leaving your native country and hosting the Irish abroad instead of being among them. The guilt is amplified when your Swedish kompisar (friends) say that you should be supporting them instead in return for stealing their women and their jobs!

You can change your friends but you certainly can’t change your football team. So on match night we’ll be cheering for Ireland while indulging in some Swedish “fredagsmys” and perhaps hitting the pub for a post-match (overpriced) pint.

The best and worst parts of being an Irish ex-pat in Sweden in other words.