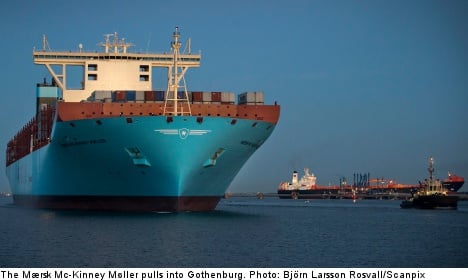 The cranes, which measure 45 metres in height, are faster than existing facilities and are required to tackle advances in the size of container ships. They will increase the port’s capacity by some 50 percent for the larger vessels.

There are currently eight cranes operating in the container port with the highest being 41 metres. The two new cranes will be shipped to Gothenburg and assembled on site in October 2014.

The cranes are part of an investment totalling some 800 million kronor ($120 million) up to and including 2017. Along with the two Super Post Panamax cranes, two further rail cranes and railway capacity will be increased to a total of six.

Keld Pedersen, CEO of APM Terminals, expects the investment to meet needs for the foreseable future.

“We should have secured the next six, seven, maybe ten years,” he said.

The terminal company has also invested in upgrading the terminal, and a project with empty containers worth a total of 135 million kronor. The remainder of the investment remains under wraps for the time being.

Freight rates for containers has taken a beating in recent years but have recently shown some indications of a recovery. Gothenburg has shown to be somewhat resilient to the fluctuations in the market.

“We have grown since we took over in January 2012. And we anticipate continued growth,” said Pedersen.

Operations in Gothenburg harbour were divided into three separate companies in 2012. Container port operator APM Terminals is a subsidiary of the giant Danish AP Moller – Maersk Group which is the same group that runs the new giant container vessels now plying Gothenburg.