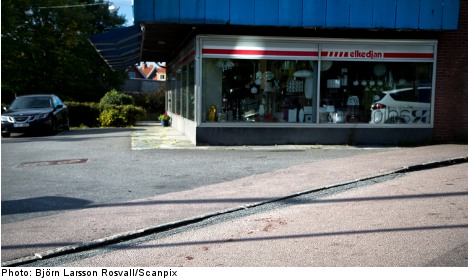 “We have a possible crime scene that we have cordoned off,” said Joakim Hansson at Västra Götaland police.

The alarm came in at 6.13am. There are currently no suspects in the shooting which follows a spate of gun crime in the city this week.

Police were called to the suburb of Hammarkullen in eastern Gothenburg shortly before half past nine on Friday evening following reports of a shooting which left one man in hospital.

Two men died after being shot in the Biskopsgården neighbourhood of the city late Wednesday night, with witnesses reporting 20 shots being fired in the fatal shooting.

The two victims, aged 17 and 28, were taken to hospital but later died from their injuries. Police have classified the incident as murder or possibly manslaughter.

Police received further reports of gunfire in the Biskopsgården and Bagaregården neighbourhoods on Friday but found no evidence to indicate that the reports were true.

According to a police statement on Saturday, it remains too early to say whether the shooting may be linked to Wednesday’s double homicide.

“I can’t answer that at this stage,” said Jenny Widén.