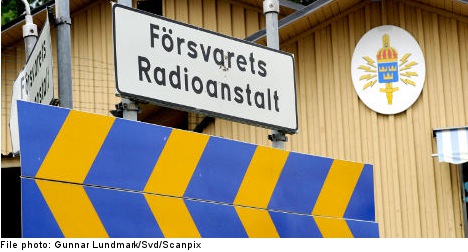 The State Inspection for Defense Intelligence Operations (Statens inspektion för försvarsunderrättelseverksamhet – Siun) has as recently as May criticized the FRA for its handling of personal information, the Dagens Nyheter newspaper (DN) revealed after an overview of the inspection’s regulatory records.

As many of the details remain secret, the entire picture is unclear, but the FRA has made use of a loophole in the law, DN reported, by providing large amounts of raw data from telephone and internet records in what it refers to as “technical development work”.

“The government has no control over how the information is used,” explained Wilhelm Agrell, professor of intelligence analysis at Lund University.

According to Agrell, Sweden sits in a geo-strategically important position with respect to the international signals intelligence system by having the ability to access cables that carry data traffic between the east and west.

“Sweden sits on a pipeline filled with golden eggs,” he added.

Last week, British investigative journalist Duncan Campbell revealed Sweden’s involvement as one of the United States’ most important partners in efforts to monitor internet communications across the globe.

“A new organization has joined the “Five Eyes” and is seen as the largest cooperating partner to [the UK’s] GCHQ outside the English-speaking countries – and that is Sweden,” Campbell told the European Parliament committee, referring to the colloquial term used to refer to the US, UK, New Zealand, Australia, and Canada.

Specifically, he pointed to the Swedish National Defence Radio Establishment (Försvarets radioanstalt, FRA), explaining that the agency helped the US National Security Agency (NSA) and British GCHQ gain access to signals intelligence carried through fibre optic cables at the bottom of the Baltic Sea.

The information comes from the latest series of documents released by NSA whistleblower Edward Snowden. The US is seeking the extradition of Snowden who remains in Russia after having been granted temporary asylum.

The news may prompt an investigation into the FRA’s cooperation with other countries.

“I am going to bring the question to the table at the next meeting on the September 18th,” the inspection’s chairman Hans-Jörgen Andersson told DN.