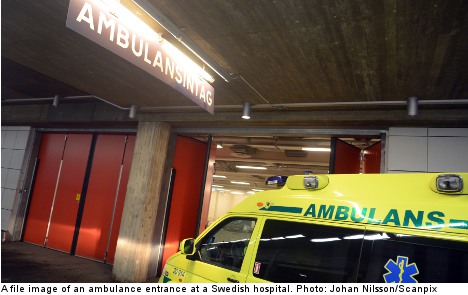 At least five shots were fired at the man, who was taken to Malmö University Hospital following the shooting.

“Several people heard the shooting and called us, and a number of people reported seeing a gunman on the scene,” police spokeswoman Marie Persson told the TT news agency.

Police have carried out a forensic investigation of the crime scene and continue to interview witnesses about the shooting, which has been classified as attempted murder.

No arrests have been made in connection with the shooting, which took place on Stensjögatan in central Malmö.

Following surgery, the 23-year-old victim remains in serious but stable condition. He was hit in the upper body by an unspecified number of shots.

“More than five shots were fired at the scene, but we don’t know how many hit him,” duty commander Hans Nilsson of the Skåne County police told TT.

An apartment in the area was also hit by gunfire during the shooting, with police planning to examine the home on Tuesday morning.

“We don’t have any named suspect as of yet, but witnesses saw a large number of people on the scene. We still don’t know how many were involved in the shooting,” said Nilsson.