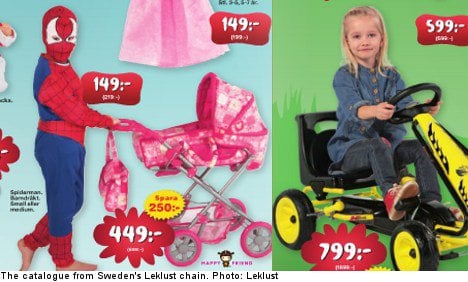 Toy company Toys ‘R’ Us has caved in to pressure from campaign group Let Toys Be Toys and agreed to advertise their products gender neutrally, a push that mirrors a similar move in Sweden last year.

“Sweden inspired us; in the UK we always look to Sweden as an icon of gender equality,” Jo Watts, campaigner at Let Toys Be Toys, told The Local.

The campaign group is run and organized by parents, and collected 7,500 signatures by people concerned that traditional advertising puts unnecessary pressure on children to conform.

“We saw Sweden’s Toys ‘R’ Us catalogue with the girl holding the gun and used that to pressure Toys ‘R’ Us here. We said ‘They’re doing it in Sweden, why can’t you do it here?'” Watts added.

The campaign group has had many positive comments for their work, Watts explained, particularly through parents active in social media circles who work to push gender equality around the country.

“Even in 2013, boys and girls are still growing up being told that certain toys are ‘for’ them, while others are not,” Megan Perryman, Let Toys Be Toys campaigner, said in a statement.

“This is not only confusing but extremely limiting, as it strongly shapes their ideas about who they are and who they can go on to become.”

In March 2012, a Swedish toy catalogue made headlines worldwide after reversing traditional gender roles by showing Spiderman pushing a pram, and a young girl riding a toy racecar.

In November of the same year, Sweden’s largest toy chain announced that its toys were all “gender neutral”, and released a Christmas catalogue depicting boys with baby dolls and girls with toy machine guns.