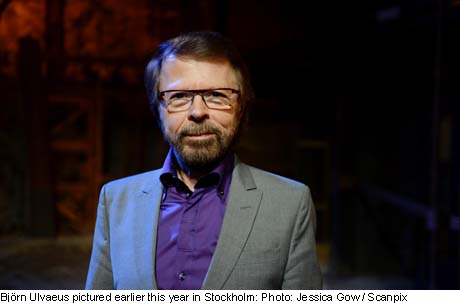 “Look at all the misery in the Middle East for example. All these countries have Islam in common, and far too few dare to criticize Islam as an ideology, and what it’s doing to these countries,” the 68-year-old told the paper.

“I know I might get punched in the face for saying these things, but my conviction is that less religion in the world would be better.”

Ulvaeus, who caused controversy earlier this year for making insensitive comments about the Boston Marathon disaster, was keen to point out his views weren’t targeted towards a particular faith or people who practice religion.

He is a member of Humanisterna (Swedish Humanist Association) which campaigns for an end to religious oppression and an open secular society.

Ulvaeus said his native Sweden is an “open, liberal, secular and democratic country” that is not overly religious.

“Religion is the root of so much misery in the world and I’ve always thought there is lack of criticism against it,” he continued.

In 2009 Ulvaeus made a plea to the Swedish government to rethink its policy on faith-based schools.

“There’s probably no God. Now stop worrying and enjoy your life,” he said in a column published on The Local.

“A religious education makes it more difficult for children to form their own views on the world. It puts obstacles in their way that not all are capable of overcoming,” he said.

Ulvaeus also killed off any prospect of an Abba reunion by saying he wants the fans to remember them during the heyday.

“I don’t think that four geriatrics wheeled on stage is what we should leave as our legacy,” he said.