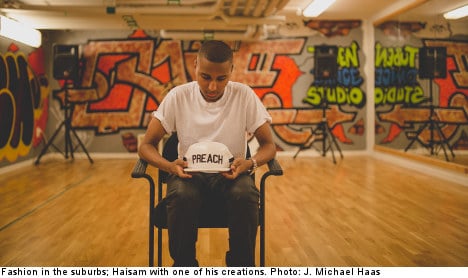 The unlikely pair have emerged as just two of a growing list of local celebrities thanks to Vi är Farsta (‘We are Farsta’), a project launched recently by a couple of local residents and organizers dedicated to building up a sense of belonging in Farsta and other Stockholm suburbs.

“We saw a lot of big buildings, but we didn’t really see the face of the people. Our idea, in short was, to show what local people are doing,” Vi är Farsta project manager Geert van den Boogaard, who hails from the Netherlands, tells The Local.

“When we started looking, we found a lot of cool stuff, like this 16-year-old guy creating his own fashion.”

Haisam, the budding young atelier, designs urban-style clothing and has his sights firmly set on becoming a success story.

“I hope that [my label] Preach will compete with the leading street-wear brands in Sweden,” Haisam told The Local.

The teenager will be showcasing a mini-collection in late autumn and hopes shortly to create an online shop to sell to the public.

Alongside Haisam, the project has also unearthed a septuagenarian Farsta resident with a collection of 8,000 postcards built up over forty years – one thousand of which he sends out every year.

“There’s a value in holding onto something from someone else, but not everyone cares about that.”

The project has also showcased stories from a four-piece teenage rock band called Hot Cherie and a fitness and dance instructor who is inspiring others to dance freely and express themselves.

IN PICTURES: More fascinating profiles of locals from Farsta

“Everyone can find value in this. Lasse [who collects postcards] enjoys telling others his story. For Haisam it’s more about networking,” says Juliia Shevchenko, a native of Ukraine currently studying at Stockholm University who is also involved with the project.

After talking to residents and posting their stories on the project’s website, the team publicized community events and even got shoppers involved in sending postcards to other Farsta residents.

Vi är Farsta is now hoping others will come forward with their stories by submitting them through the website, which went live last month and already features nearly 20 profiles, as well as a calendar of local events.