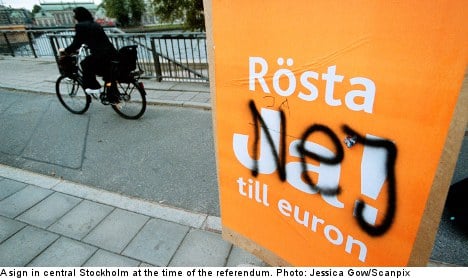 On September 14, 2003, Swedes went to the polls to cast their vote on whether or not to abandon the krona and take a first step toward joining the euro.

Campaigns run by both the “yes” and “no” side of the debate raged for months, and broke down largely along ideological lines.

While the Moderates, Liberal Party (Folkpartiet), and the Christian Democrats supported a vote in favour of adopting the euro, the Centre Party, the Greens, and the Left Party pushed for Sweden to retain the krona.

Meanwhile, the Social Democrats who were in power at the time found themselves split, with some factions of the party in the “no” camp, while others, led by then Foreign Minister Anna Lindh, beating the drum for Sweden to join the euro.

Lindh's killing on September 11th, 2003, just days before the referendum vote, put a stop to further campaigning and left analysts wondering how her untimely death, which overshadowed the referendum, might affect its outcome.

When all the votes were tallied, it was clear that Swedes were in no mood to join the newly established European currency, with 55.9 percent voting “no” while only 42 percent voting yes.

Per Altenberg, a Liberal Party member and supporter of the euro both then and now, believes the timing of the referendum likely didn't help its chances of passing in 2003.

“Maybe if the vote had been a couple of years later, the outcome would have been different,” he tells The Local, adding there were several factors that led Swedes to vote no.

“In part it was probably also because the 'yes' campaign wasn't run very well.”

But in the wake of the debt crisis which has shaken the confidence of many staunch supporters of the common European currency, Altenberg says it will likely be a long time before Swedes face another referendum on the joining the euro.

As the eurozone crisis raged in late 2011, Foreign Minister Carl Bildt of the Moderate Party hinted that Sweden would hold a referendum “within a few years” or risk losing influence in policy decisions that would ultimately affect Sweden's economy.

Furthermore, journalists PM Nilsson and Annika Nordgren Christensen argued on the Newsmill opinion website last year that Finance Minister Anders Borg's policies have been designed to adapt the Swedish economy to joining the single currency in the future. Indeed, they argue that Sweden has been better than almost any euro member in sticking to the terms of the Stability and Growth Pact.

SEE ALSO: Get the latest exchange rates and transfer money on The Local's Currency page

But in May 2013, prominent Moderates MPs Sofia Arkelsten and Hans Wallmark emphasized that Sweden should only consider joining the euro if the currency union was “well-functioning” and “the countries who share in the common currency implement responsible economic policies”.

Opinion polls carried out in the last couple of years consistently show Swedes' support for the euro is falling, and Altenberg finds himself in the minority when it comes to his continued belief that the euro has a future in Sweden.

He admits that reforms are necessary before it even makes sense to ask the question a second time.

“At this point, I'm not in favour of a new referendum. We need to wait at least until they come up with a political framework for dealing with sovereign defaults,” he says, referring to one of many eurozone reforms up for debate.

“Once it can be demonstrated that the eurozone can deal with defaults without costing taxpayers, then I think Swedes may have more confidence in the euro.”

While acknowledging he has “less confidence in European political leaders to make the right decisions” following the euro crisis, Altenberg still believes Sweden has much to gain by giving up the krona in favour of the euro.

As a small, export-oriented economy heavily dependent on trade, Sweden would have benefited from increased trade and investment had it adopted the euro, argues Altenberg.

“I don't think the negative effects of losing control of our monetary policy would be sufficiently strong to offset the benefits,” he argues.

But Jonas Ljungberg, a professor at the Department of Economic History at Lund University, counters that the risks that come with giving up the power to set interest rates shouldn't be underestimated.

“A 'one-size-fits-all' approach to interest rates doesn't work in the eurozone. The countries are simply too different,” he tells The Local.

Ljungberg contends that the entire euro project is flawed as the eurozone doesn't correspond to an optimal currency area that is set up to reap the benefits of having a common currency.

“You end up with some countries following the European Central Bank (ECB) that have their interest rates too low, which can lead to the sort of real estate bubbles that hit Spain and Ireland,” he explains.

“While in Germany interest rates are likely too high and this leads to deflation and falling wages.”

He cites calculations carried out by Lars E. O. Svensson, a former Riksbank deputy governor, that tried to quantify the costs of euro membership to the Swedish economy.

“He found that Sweden stood to lose 50,000 jobs if the ECB rate was a half-point too high,” says Ljungberg. “Sweden would not have benefited from joining the euro. Rather, I think Sweden has benefited by staying out.”

He credits Swedish voters for “not being swayed by the arguments of the elite” who campaigned in favour of euro membership back in 2003.

“The elite were very dismissive of the concerns and arguments of the rest of the public,” he says. “It's not enough to just say that only people who are uneducated are against joining.”

The eurozone crisis hasn't help boost Swedes' confidence in the common European currency, perhaps exacerbating a latent “hesitation about handing too much power to Brussels of Frankfurt”, says Ljungberg.

Up until 2009, support for the euro among Swedes hovered around 40 percent, with just over half of those polled saying they were against joining.

But ever since early 2010, support for the euro has plummeted. In May 2013, a poll by the SOM Institute in Gothenburg revealed only nine percent of Swedes were in favour of joining the euro.

“I think a large part of the present resistance among Swedes toward the euro is due to the crisis,” says Ljungberg.

He also believes the eurozone needs major reforms in order to return to growth and that Swedes won't likely warm to the idea of joining the euro until then.

And even if the eurozone manages to right itself and become an engine for growth, he doesn't see the matter being put to a vote in Sweden “for at least five years”, adding that in the end it is “political realities that decide”.

Altenberg agrees that politics are paramount in any discussion about another Swedish referendum on the euro.

“Much also has to do with the perception of who the Swedish economy is doing relative the other economies in Europe,” he says.

“If we suffered a new banking crisis or a housing market crash, for example, that could change people's views about the merits of joining the euro.”

PARTNER CONTENT
New data: is sending money from Sweden to your country getting cheaper?
Url copied to clipboard!