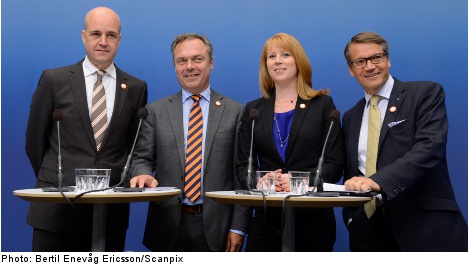 “People who work should get more in their pocket,” Prime Minister Fredrik Reinfeldt said at a press conference on Monday morning.

The fifth round of tax credits will be worth around 350 kronor ($53) for those earning an average salary of around 27,000 kronor per month.

The Alliance parties also declared their intention to increase the threshold for state income tax, which will provide a further 250 kronor per month for those earning in excess of 38,000 kronor.

The government’s combined tax reforms will cost the state some 15 billion kronor and the proposals have courted criticism from the opposition as well as some prominent economists.

But while the main opposition party, the Social Democrats, have expressed opposition to the move, party leader Stefan Löfven has declared that they will not reverse the earned income tax cut if they gain power.

The government insisted on Monday that Sweden’s welfare state will remain strong despite the tax cuts, which were first presented by Prime Minister Fredrik Reinfeldt in August.

“We can conclude that Sweden is good at healthcare, we spend more money than almost all other countries,” Social Affairs minister Göran Hägglund said.

The changes will come into effect from January 1st 2014 and form the last major budgetary initiative of the parliamentary term, meeting the Alliance government’s manifesto pledge from the election in 2010.

The government has claimed that the tax cuts will generate some 13,000 new jobs.