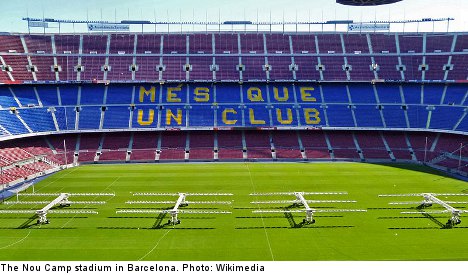 “I am going on Wednesday. It’s going to be great fun,” he said to the local Skånska Dagbladet daily after playing his final match for BK Olympic.

Zico thereby follows in the footsteps of Swedish stars Zlatan Ibrahimovic and Henrik Larsson in trying to carve out a career at the Nou Camp.

While the youngster has some way to go before emulating the achievements of Zlatan and Henke, the gutsy boy will takes his first steps by moving in to the Fundacion Marcet academy. His father is set to join him in Spain 4-5 months later.

“Zico is going to board with all the others at the academy. This feels good, there he can get to know all his new friends,” Zico’s father Antonio Marecaldi told the newspaper.

Zico, it seems, is a childhood FC Barcelona fan and Argentinian star Lionel Messi is his idol. The young boy’s namesake is however the silky-skilled Brazilian midfielder who played in several World Cups in the 1980s.

While FC Barcelona have first refusal on the young footballers at the academy, it is international and thus the young prospects can become the targets of other professional clubs.