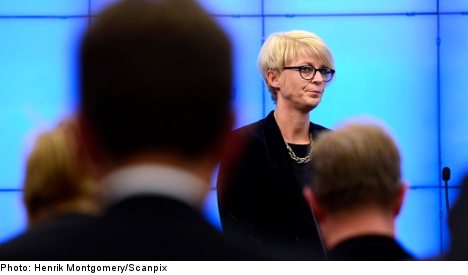 Despite the new minister’s protestations that her religious faith is a private matter, some commentators argue that her past can make things difficult for the government.

“The risk is that religious extremism could haunt Elisabeth Svantesson and the government throughout her time as a minister,” Lena Melin at the Aftonbladet tabloid said.

Political scientist Maria Demker, who is herself religious, argued that the political implications of her background will depend on how she and Prime Minister Fredrik Reinfeldt deal with it.

“This a woman who has a licentiate degree in economics and who has led the parliamentary employment committee for some time… Rationally this should put the debate to bed, but I’m not so sure about that,” Demker said.

“It depends on how she and the prime minister continue to deal with the issue. It also depends on what journalists can find that is perceived as incriminating,” she added.

Political scientist Andreas Johansson Heinö took to Twitter to describe the scrutiny of Svantesson’s background as “idiocy” and expressed support for the analysis of the new minister’s merits instead of “prejudgements”.

Yes to Life is an anti-abortion association which was founded by a member of the Swedish Word of Faith movement. Svantesson served as press secretary for the organisation and is reported to have taken part in a demo against abortion in 2009.

Svantesson was also critical of legislation (which was approved by parliament in 2009) which removed discrimination against homosexuals in Sweden’s marriage law.

Livets Ord (literally Word of Life) is the largest parish within the Swedish Word of Faith movement and was founded by Ulf Ekman in 1983.

The church is characterized by adopting a more literal approach to interpreting the bible and has been criticized for, among other things, the teaching in some of its schools, and (by a former member) for adopting manipulative methods.

The group has ties to the US pentecostal movement.