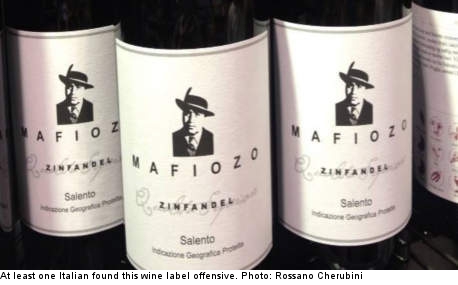 Complaints about the “Mafiozo” Zinfandel wine came from Rossano Cherubini, 42, an Italian living in neighbouring Norway who stumbled across the wine being sold in Norway’s state-run liquor store monopoly Vinmonopolet.

“As an Italian living here in Norway I found it to be very offensive and demeaning,” he told The Local Norway.

While the Mafia was romanticized in the US and Europe, he added that in Italy “it tragically plagues tens of thousands of people every day.”

Cherubini’s anger over the wine led him to contact the Swedish wine distributor that produces “Mafiozo” wine.

Simon Kallquist, 31, the founder of Concealed Wines, defended the label, arguing that the wine was called Mafiozo, not Mafioso, and referred to a style of hip-hop singing, rather than to the Italian organized crime group.

As for the wine’s label, which features a 1930s Mafia gangster figure, he said he “just thought it was a funny label”.

Read more about the story on The Local Norway by clicking here.