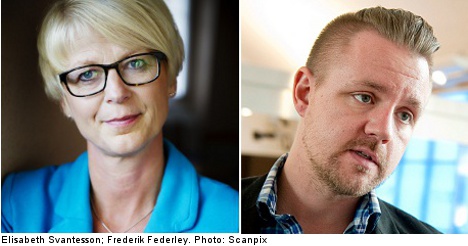 “I have known Elisabeth Svantesson for seven years. Had she been a homophobe she would have been criticized, not least by myself,” Fredrik Federley told The Local on Friday.

Federley furthermore argued that the media coverage of Svantesson’s appointment to the post of employment minister following Prime Minister Fredrik Reinfeldt’s surprise cabinet reshuffle on Tuesday, has been “one-sided”.

“It has been problematic. One-sided and given the impression of a gigantic storm of public opinion. This ignores the fact that there is support for her in the Riksdag, based on her work as chair of the labour market committee.”

Much of the criticism towards Elisabeth Svantesson has focused on her background within the Word of Faith Christian movement, known as Livets Ord (literally: Word of Life) in Sweden, and in an anti-abortion group.

Svantesson has stated in interviews this week that she left the Word of Life in 2000 but this is disputed by Swedish author and former member Per Kornhall, following revelations that she is a member of the Christian Center in Örebro.

“I was surprised when she said that she had left Livets Ord. She has simply moved town. The Christian Center in Örebro is the same thing. It is simply a satellite organisation of Livets Ord,” Kornhall told The Local on Friday.

“It could have been some form of tactic by Svantesson to say that she had left, I can only speculate. But the point is the information is not correct. She hasn’t left the movement,” he said.

Kornhall has written a high-profile book based on his time as an active member of Sweden’s Word of Faith movement, an organisation which he classified on Friday as as political.

“This is not some group that meets on a Sunday merely to pray. They work politically. For example they work actively in their support for the state of Israel which they regard as having been created by God,” he said.

“I can imagine they are very happy that one of their members is now a minister,” he added.

Kornhall told The Local that Livets Ord classifies homosexuality as an evil force that should be purged from the body and argued that it would be difficult for any member to take a contrary stance in favour of LGBTQ rights.

“That would be difficult. You would encounter problems.”

Frederik Federley meanwhile rejected the argument that Elisabeth Svantesson’s faith would impact on her work as employment minister.

“There is one year to the election and she has thus one year to work as a minister. I am completely convinced that government policy will not change one bit in this time,” he told The Local.