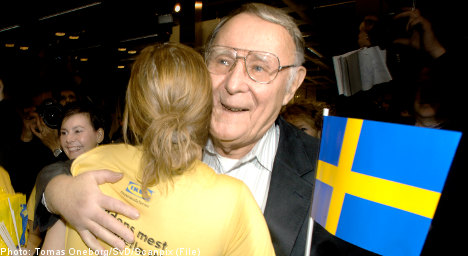 Claims in a new book,’Ikea Moving to the Future’ (Ikea på väg mot framtiden), about internal family friction have rocked the Kamprad family claims Göran Grosskopf, who is the chairman of the board of directors for the Ikea group.

He initially declined to comment on the findings in the book but has since added that the Kamprad family is “naturally extremely distressed and disappointed” over suggestions there is an internal power struggle.

“In all families there are conflicts of course but I do not know of any conflict which in any way affected the Ikea group,” Grosskopf told Dagens Industri.

The book penned by Lennart Dahlgren, the former head of Ikea in Russia, and researchers Stellan Björk and Karl von Schulzenheim claimed that Kamprad’s sons hired a star lawyer to dispute the family fortune. Founder Kamprad is estimated to have as much as €3.2 billion in net wealth.

As yet, the Kamprad family have yet to issue a statement on the book with Grosskopf saying the sons haven’t read the book in its entirety.

“They have not had the chance to read the whole book and I don’t know if they will comment on it when they have,” he said.

Grosskopf downplayed the reports in the book which claimed that the alleged familial battle led to Kamprad senior falling into bad health.

“From the excerpts I have read there isn’t much evidence,” he added.

Ingvar Kamprad,87, founded Ikea in 1943 establishing it into one of the largest retail giants in the world. He has resided in Switzerland since 1976 but announced in June that he intends to return to Sweden by the end of the year.