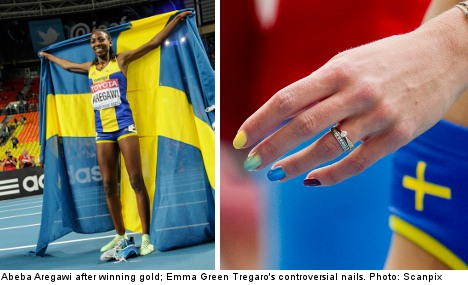 “I felt like nobody really celebrated my gold but it was more about what I sad at that press conference,” the 23-year old told Dagens Nyheter.

Aregawi, who was born in Ethiopia and has been a Swedish citizen since 2012, won the women’s 1500m title last month. Her victory was dwarfed by the actions of Swedish high jumper Emma Green Tregaro and sprinter Moa Hjelmer, who made headlines by painting their fingernails with the colours of the rainbow to support gay rights in Russia.

Gold medal winner Aregawi declined to join her team-mates saying;”Personally, because my faith doesn’t allow it, I don’t support it.”

However, a month on from the saga and the champion athlete backtracked placing the blame for the controversy on management in the Swedish athletics association.

“Somebody in the management should have prepared me for that question. I did not understand what the questions were about at the press conference. I’m disappointed that I didn’t get any help.”

The Swedish citizen was dubbed in some quarters to be a “homophobe” for her original comments but was keen to set the record straight.

“I respect all people and that all of us are equal. Sweden is a free country where everyone has the right to do what they want.”

Aregawi added that suggestions that her marriage to an Ethiopian man with Swedish citizenship was a sham to get citizenship were untrue.

“They want to destroy my career but I’m not disturbed by such things. I’m concentrating on my running.”

Husband Henok Weldegebriel added; “I don’t know where these rumours come from. People are trying to make her feel bad. We have been married since 2008 and nobody paid to bring her to Sweden.”