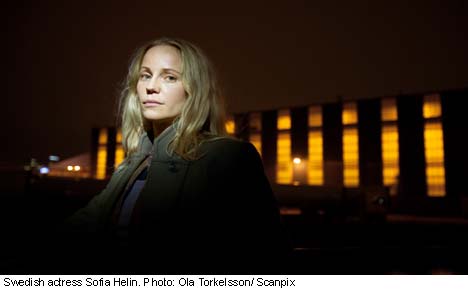 Since being originally broadcast in Scandinavia in 2011 the show has been sold to 131 countries. It proved to be particularly popular in Britain with episodes regularly getting over one million viewers on BBC 4.

“I went to Britain to present a prize at an awards ceremony and figured nobody would know who I was. I wasn’t that excited about it until I went into the room and everybody had seen the show and were waxing lyrical about it. I was very surprised,” Helin told Expressen.

The 41-year old actress plays straight talking Saga Norén in the detective series which is largely shot in Malmö. Helin has received a lot of praise for her portrayal of the character who has Asperger syndrome.

“To live with a character that is so different inevitably affects me. But now she is more like a friend.”

She added to SVT, “I imagine that quite a few would do well to embrace her type of behaviour and say a bit more bluntly what you need and like.”

Helin teams up again with Danish actor Kim Bodnia, who plays detective Martin Rhode, in the second series which premieres on SVT 1 on Sunday at 9pm.

In addition to being sold to 131 countries ‘The Bridge’ has also been remade in several other places including the US and France.