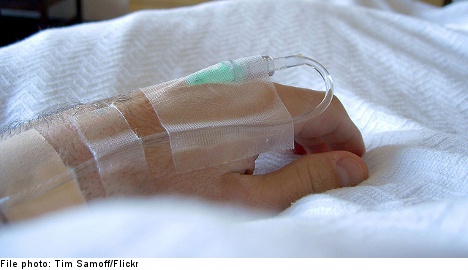 The 74-year-old man, who had chronic lung disease, had been originally been told to come to Helsingborg general hospital on June 25th after developing an aortic aneurysm.

Due to his other health issues the man required additional post-operative care and his operation was pushed forward to July 25th.

When he showed up on this date he was told the operation would be postponed again due to a lack of hospital beds and because no other patients were in a position to move to accommodate him.

His operation was pencilled in for August 9th but was again cancelled when a higher priority patient was given his slot. The operation was moved to September 6th but the pensioner died on the operating table after he was rushed to hospital when his aneurysm burst.

Now the Health and Social Care Inspectorate (Inspektionen för vård och omsorg -IVO) has given Helsingborg general hospital until October 20th to show how the lack of space can be solved.

“The availability of beds in Region Skåne in general and Helsingborg in particular is often poor as is evident by the investigation carried out by the hospital,” said the IVO in a letter written to Region Skåne.

The letter adds that the IVO believes that the hospital did not take the necessary measures to deal with patient safety.

Earlier this month it was reported than an 84-year-old woman died after being unable to find a bed at the Sahlgrenska University hospital in Gothenburg after saying she was suffering with chest pains.

On that occasion the IVO criticized the hospital saying their investigation into the matter was insufficient.