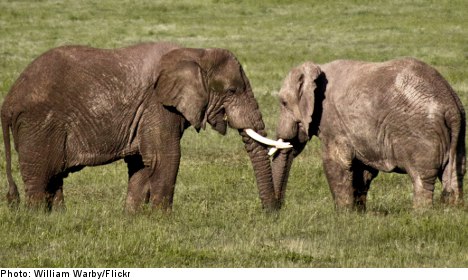 The Uppsala Auktionskammare is one of Sweden’s oldest auction houses specializing in fine arts and antiques.

Thirty ivory items had been put up for an online auction, according to the Aftonbladet newspaper, which alerted the attention of the police.

“Obviously they are cheating with evidence,” said Andrea Ljung of the Swedish board of agriculture (Jordbruksverket).

Police interrupted an auction last month to seize the ivory which is suspected to have come from thieves who shot the elephants.

CEO of Uppsala Auktionskammare Magnus Bexhed told the paper that he was happy the issue was being discussed and added that the auction house usually says no to ivory sales.

“We, like all serious operators, are very strict when it comes to ivory and say no to most of them,” he said.

Attention to the matter was raised when the origin of the ivory was not published in the online catalogue.

“It would have been better had we been clearer with the cataloguing,” added Bexhed.

Owner Knutson, who is a familiar face to Swedish viewers due to his long association with the Antiques Roadshow programme (Antikrundan), declined to comment to the newspaper.

Illegal ivory trafficking is the third largest criminal industry in the world after drug smuggling and piracy.

It’s estimated that 154 tonnes of elephant tusks – the equivalent of 70,000 elephants – are trafficked each year from east Africa alone. Ivory remains particularly coveted in Russia and the US.

The Uppsala auction house has asked that the preliminary investigation be drawn to a close and said that they have provided all necessary documentation dealing with the matter to the police.