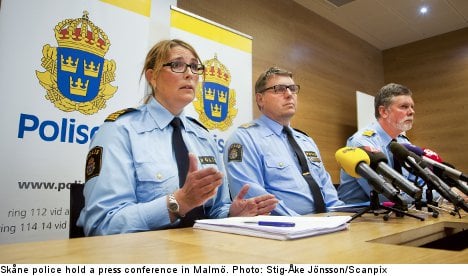 “We have handled this in the wrong way,” Klas Johansson at Skåne police in southern Sweden said on Tuesday, regarding revelations in the Dagens Nyheter (DN) daily that two police registers of the Roma community were in operation.

Reports emerged on Tuesday that a second registry containing 997 names, most of which are Roma, had been compiled by the Skåne police with over 100 of the names belonging to children under the age of ten, with some as young as two.

The news followed Monday’s revelations in DN that the same police station had a list of 4,029 Roma names, also including young children. A retired officer stated on Tuesday that the first and more comprehensive list was compiled in 2005.

“This is serious and I am obviously very concerned,” Johansson said.

Johansson added that he can understand that the general public is now concerned over how personal data is being managed and that confidence in the police force has taken a hit.

He admitted the existence of the second registry on Tuesday following police denials after the intial revelations emerged on Monday. The second registry is stored in the same place as the larger list, in a computer file folder labelled “itinerants” (kringresande).

The decision to effect an internal police investigation has been initiated although no officers have yet been reassigned as a result of the revelations.

According to DN, the databases consist of family trees that include personal identity numbers (personnummer) and addresses combined with arrows that indicate how people included in the registry are related.

The anonymous and now-retired police officer from the station in question has said the list was made at a time when there was a series of crimes in the area that police suspected were committed by the Roma community.

Thomas Nilsson, head of the police district central Skåne, explained that the material has been used in crime prevention.

“We have benefited from the intelligence material,” he said.

The Swedish government has been contacted by the Council of Europe regarding the register, which the organization’s secretary-general Thorbjorn Jagland has called “sad”.

“The registration runs contrary to the European Convention on Human Rights and certainly also against data protection laws. It is illegal to register people, or store data, based on ethnicity,” Jagland said.

The Equality Ombudsman (Diskrimineringsombudsmannen – DO) will also launch an investigation to determine whether the people on the registry were subjected to any kind of discrimination.