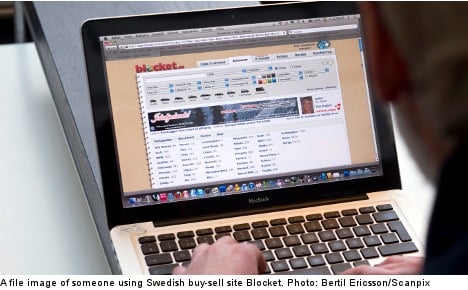 One of the main perpetrators of the scam was initially sentenced to two years in prison for offences dating back to 2008. However, he avoided prison in part because five years elapsed from the time the crime was committed to the time the ruling was handed down, the local Hallands Nyheter newspaper reported.

Many of the dodgy deals involved victims shelling out hundreds of kronor for mobile phones, computer games, and other electronic items. One victim was tricked into paying for a phantom mountain cabin while another bought several non-existent puppies.

It’s estimated that over a million kronor was spent on the fake items although the actual number is likely to be much higher as it is believed many victims failed to report the fraud.

A total of 23 people, most from western Sweden, were prosecuted with 22 convicted of serious fraud. Most denied the charges.

The three suspected ringleaders were sentenced to 18 months in prison. A 26-year old residing in Halmstad was given a two year sentence for serious fraud.

A total of 13 of the 22 people convicted appealed their convictions. One 26-year-old avoided a prison sentence and was instead given a fine and released on probation as the court took into consideration that he was 21 when the fraud took place.

Many others had their sentences modified and reduced. Only two men, aged 26 and 27 years old respectively, were given a prison sentence of a year each. A 23-year old woman was acquitted completely.

In its lengthy ruling, the court added that the crimes were organized and had been carried systematically with offenders working together to target victims.

Last month it was revealed that fraudsters were posting fake apartment listings to target students with Blocket urging users to keep their wallets sealed under a contract is signed.

“If a landlord starts talking about sending money, that’s when you should report him to us,” a spokesperson for Blocket told The Local.

In July, it was reported that a man had conned 50 Swedes to part with 400,000 kronor for items that the buyers never received using Blocket.