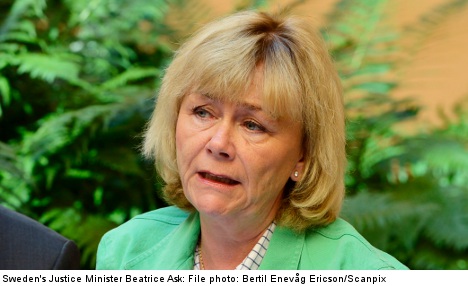 “I share their outrage,” Ask said on Wednesday, promising an open transparent investigation of the matter.

The minister has scheduled a meeting with representatives of the Roma community on Monday in a bid to repair confidence in the authorities.

“There are many people that we now have to meet and listen to. It is important for me to take in the concern and anger generated by this, but also the perception of how the authorities act,” she said.

“My responsibility and promise to them is to ensure that all the facts come out and that we sort this out in a positive manner,” she added.

It was revealed earlier this week by the Dagens Nyheter (DN) newspaper that the Skåne police had kept two registries containing thousands of Roma names. Over a thousand young children were included on the lists.

Meanwhile National Police Commissioner Bengt Svensson has been criticized by his police force colleague Peter Springare, head of the Serious Crime Unit in Örebro county who has said that registries of criminal networks and social contacts are all part of regular police work.

“Bengt Svenson if anyone should know and understand that what has been called registration of Roma can be this intelligence work which is done to combat crime,” he said.

“But Bengt Svenson goes out, from day one, in a sort of panicky politically correct condemnation and says it is a crime, brings shame on the police and so on, that is what I react strongly to.”

Springare did however argue that it would be “reprehensible” if it is found out that the police registered the Roma based on their ethnicity, while expressing doubt that this was actually the case.

Beatrice Ask conceded that mapping was indeed a part of routine police work but underlined that there were “clear guidelines” for what was acceptable.

“There are very clear rules for that which is relevant. If you have mapped whole family trees from a certain ethnicity in a way that is far removed from police investigations – this is outrageous,” Ask said to Sveriges Television.